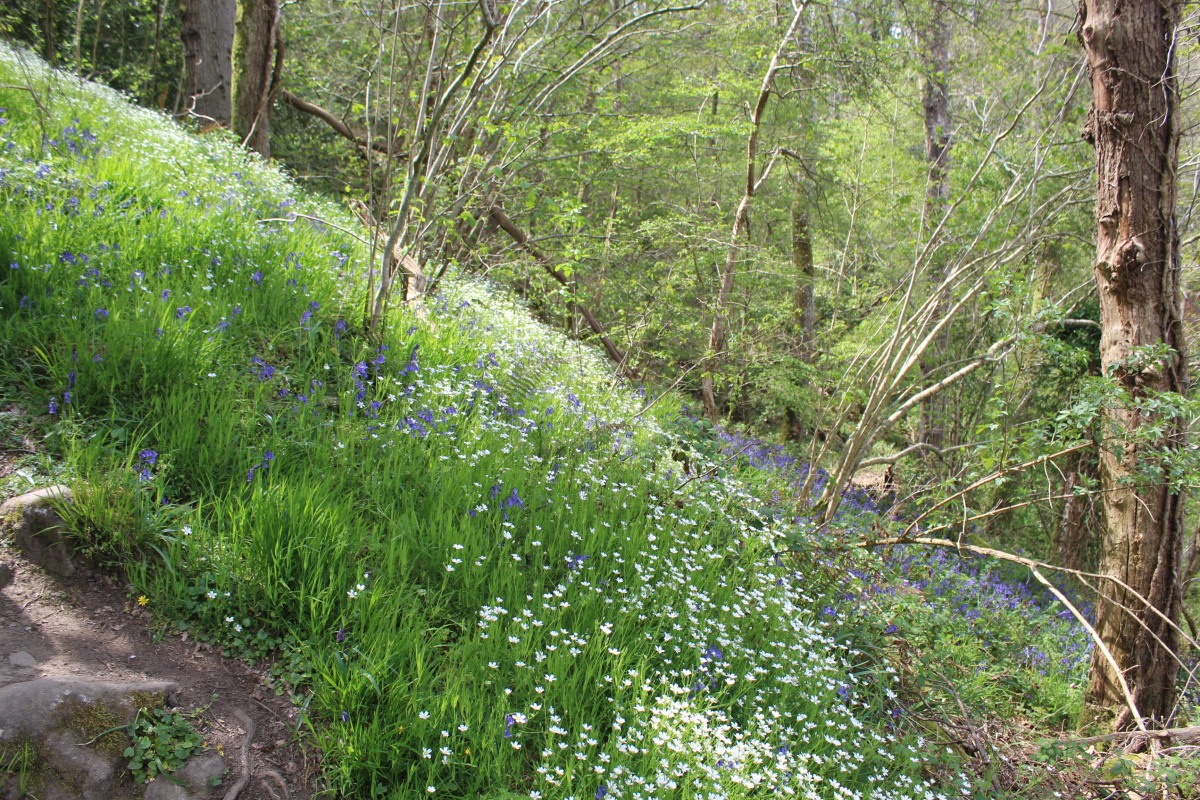 A mere stone’s throw from the Canyon des Toyères which I wrote about in my last post is Saint-Céneri-le-Gérei, officially one of the prettiest villages in France. Nestled in the picturesque Alpes Mancelles, it is a gem of a place and beautiful in any season but I have a particular soft spot for it at this time of year when the wooded hillsides are bursting with fresh leaf and carpeted with a soft haze of bluebells. We haven’t visited since our return to Mayenne so it didn’t take us too long to decide where to go for our walk this week!

This is one of our favourite jaunts, a comfortable three-mile loop that starts in a pretty spot by the side of the Sarthe river. It’s a tranquil place, the river wide and lazy after so little rain, and flanked by meadows full of buttercups. There are picnic tables here, and several old buildings converted into gites; you could pick worse places for an al fresco meal or holiday, that’s for sure.

A wooden footbridge beyond a former mill took us across the river, leaving Mayenne and into the neighbouring department of Sarthe, although still in the Pays de la Loire region. The path then starts a long, slow climb with sweeping views of wooded hills on one side and a teasing glimpse of St Céneri on the other.

We had just been discussing how everything still seemed familiar to us and nothing had appeared to have changed since we last walked here (which must be seven years ago) when what we had expected to be an orchard delivered quite a surprise: it is still an orchard, but now also the home of a large herd of free-range pigs! It was lovely to stand and watch them for a while, enjoying the outdoor life as surely pigs should, some busy rootling about in the baked earth but most of them snoozing away the afternoon in the sun. Talk about chilled! I suspected they would be happy to see the rain forecast the next day, their wallows being as far removed from mud as is possible . . . but they seemed a pretty contented bunch all the same.

After passing through a small hamlet of pretty stone houses, their gardens billowing with iris, tulips and forget me nots, the path turned back downhill, meandering through woodland towards the village. Here the bluebells were at their most beautiful, dense carpets creating a colourful haze in the dappled sunlight beneath the trees; whether simply massed in deep blue, or daubed amongst white stitchwort and creamy Solomon’s seal, they were stunning. As for that heady perfume . . .

Emerging from the woods, the path levelled out a little and water meadows appeared to our left. It’s hard to believe we’ve walked here before as if along a stream bed, with water literally flowing beneath our boots; I’m not sure we’ve ever seen this path so dry. At a point just before reaching the village, we passed from Sarthe into the department of Orne and at the same time into the region of Normandy, a reminder that our little corner of Mayenne is very much border country.

At the end of this path, we emerged from the trees and found ourselves at the picturesque stone bridge that leads into the village. There is a stunning view of the 11th-century Romanesque church perched high above on a cliff, a scattering of lovely old stone houses and pretty sweeps of blossom and spring flowers. We have seen kingfishers here previously, darting close to the water in bright flashes of metallic blue; not today, but there was a lone wader-clad fisherman trying his luck on a bend in the river.

Wandering up into the village, I realised that I’d forgotten what a delightful place it is with its winding streets of higgeldy-piggeldy houses, dripping with clematis and wisteria. The only thing that seemed strange was the fact that the bars, cafes and restaurants were all shut, their terraces devoid of the usual buzz of activity; that is set to change on 19th May when the next phase of relaxing restrictions will allow them to open once more, much to the relief of owners and customers alike. It’s no surprise that St Céneri is a popular destination for visitors and is particularly bustling during the summer holidays, yet I’ve always felt it has retained a strong sense of itself. There has been no slide into the dark realms of tacky gift shops, caravan parks, double yellow lines, extortionate car park charges and the like; tourists are welcome, but it is still very much a ‘local’ village. I love the little hidden nooks and crannies, the quaint human touches coupled with unfettered nature; the wonderful informality and unashamedly wild character of this garden is exactly the sort of thing we are hoping to create in our own patch.

We climbed the street that leads to the church, knowing that a narrow path goes right around the building, the perfect spot for a beautiful bird’s eye view back down to the stone bridge. However, looking for a photo of the said view, I realised we didn’t have an ‘unadulterated’ one so the time has come for me to make an introduction (apologies for this rather ridiculous diversion): ladies and gentlemen, meet Kitchen Ted.

Who? Well, he’s a little character I knitted up in the final days before we left Asturias; you’d think navigating an international house move through the shark-infested waters of Covid-19 and Brexit would have been more than enough to be concentrating on at the time but maybe this was a little bit of self-indulgent, stress-busting madness! I contemplated a tiny skein of homespun Southdown fleece dyed with onion skins and a scrap of rather luxurious jade Merino / silk blend and before I knew it, a small bear had been born. For the best part of eighteen months now, the only contact we have had with our young grandchildren is via video calls; I am so grateful we have the technology and our weekly chats are very special, but never the same as spending time together and making simple mischief. Enter Kitchen Ted (he’s called that because he, um, lives in the kitchen) who behaves very badly on our calls, generating peals of giggles at the other end and generally bringing a lot of fun to our chats. He also gatecrashes our days out, sending photos to the littlies to show what he’s been up to and most especially, anything delicious that might have been lurking in the picnic or cake box. Perhaps we should have called him Yogi? In short, it’s one of those mad family things, totally daft but rather lovely at the same time. However, the next time he muscles in on all the panoramic photos, I shall be leaving him in the kitchen where he belongs . . .

From bears to bees, and the protected bees’ nest that is hidden deep within the church wall. The story goes that in the year 898, a colony of honey bees saw off a group of soldiers bent on sacrilegious destruction on this site, sending them packing over the steep cliff. Ever since, they have continued to protect the church and are themselves the object of special protection; they were certainly fizzing out of the hole in the sun-warmed stone and, even as former beekeepers used to being close to bees, it seemed wise to keep our distance and treat them with the complete respect they deserve.

From the church, the path leads down to a tiny chapel sitting in a wide meadow which is bounded by a loop of the river; in contrast to the dappled light and blues and whites of the woodland, it was alive with the bright sunshine of buttercups and cheerful whirring of crickets.

This is a place of utter tranquility, scattered stone benches offering the chance for visitors to sit, rest and simply drink in the beauty of the place and complete immersion in nature. We shared a flask of coffee, faces turned to the sun as a chorus of birdsong ricocheted off the wooded valley sides and butterflies floated idly by. There were a few others doing much the same thing there; no problems with social distancing and no-one wearing masks – it felt like a glimpse of the normality we used to take for granted and one we will hopefully be blessed with again.

The meadow is a hard place to leave and the temptation is certainly to linger but as it is only a few miles from home – a decent bike ride, in fact – then we will certainly be back before too long. The only decision on leaving was whether to wind our way back through the village down streets we had missed or to wander along the river to where we had started our walk.

In the end, we plumped for the river option, still hopeful for a glimpse of those elusive kingfishers; no such luck, they were definitely playing hard to get. Maybe next time? What a lovely walk it was and a gentle reminder of just what treasures we have on our doorstep; it was time to head back to jobs in the garden . . . but here’s to the next little excurson! 😊